As an Amazon Associate, I earn from qualifying purchases with no additional costs for you.

I understand that it is still difficult for many of you to distinguish between Slovakia and Slovenia. But don’t worry, after reading this post, you will never be wrong about these two countries again.

If you are interested in buying perfect Slovak gifts or useful Slovak products you can find them by clicking here (Amazon link).

What’s the difference between Slovakia and Slovenia?

Slovakia and Slovenia have many similar features in common, which make them difficult to distinguish. Not only their names but also their flags, geographical location, size, or language are very similar.

Quick facts about Slovakia and Slovenia:

All data used comes from the official websites of these countries (source 1 and source 2). As you can see from the table above, these two countries have a lot in common.

Interesting fact: In the past, Slovakia and Slovenia belonged to one state, the Kingdom of Austria-Hungary. 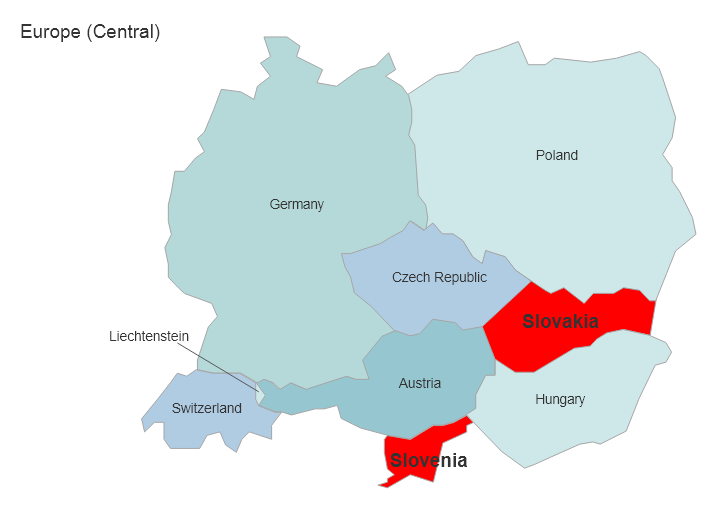 Slovakia is bordered by Poland, the Czech Republic, Austria, Hungary, and Ukraine. Slovenia borders Italy, Croatia, Hungary, and Austria. This shows that we have two common neighbors, Austria and Hungary.

I know, the flags of these two countries are really similar. Both are colored by the pan-Slavic colors which are White, Blue, and Red. And both contain a coat of arms.

The currency of Slovakia and Slovenia

At present, both countries use the Euro as their national currency. Slovakia adopted the Euro in 2009 and Slovenia in 2007. In the past, the Slovak koruna was used in Slovakia and the Slovenian tolar in Slovenia.

TIP: Check out my list of recommended Slovak products. They are perfect as gifts or you will use them during your visit to Slovakia (Amazon links)

Why do Slovakia and Slovenia have similar names?

Slovenia was formed by the disintegration of Yugoslavia. The name Yugoslavia tells us that it is a place in the south that was inhabited by Slavs. Due to political disagreements, the Kingdom of Yugoslavia began to gradually disintegrate, Slovenia became independent in 1991. The name Slovenia originated from the predominance of Slavs who lived in this area.

So the names of both countries are based on the same concept: Slavic. The only difference is that the Slovenes belong to the southern branch of the Slavs, while we Slovaks belong to the western.

In the past, there have been several funny situations at the confusion of Slovakia and Slovenia. Politicians, in particular, have repeatedly managed to swap the two countries, causing humorous “scandals”.

I will mention the three most interesting:

Did you know? Slovaks most often meet Slovenians as representatives of embassies, when they meet every month to exchange letters sent to the wrong country 🙂
* No, this is not true, it is just a joke about the similarity of these two countries.

Should I visit Slovakia or Slovenia?

I should probably tell you that you should definitely visit Slovakia. But to be honest, both countries are worth visiting.

Slovakia and Slovenia are well-known and popular tourist destinations mainly due to the enchanting nature and mountains. Take a look at these charming photos.

If I can advise you, I would visit both countries. Slovakia and Slovenia are not far away from each other so it is possible to visit them during one trip around Europe.

But I recommend you visit them separately, or in conjunction with other surrounding countries (mentioned in the previous section).

How to travel from Slovakia to Slovenia?

Unfortunately, there is currently no direct air connection between Slovakia and Slovenia. However, if you would like to fly, you will have to make one transfer on departure from Slovakia. The price of a one-way ticket is around 150 – 200 euros.

As in the case of air transport, there is no direct connection between Slovakia and Slovenia in train transport.

But if you are in Bratislava or its surroundings, the best way to get to Slovenia by train is to take a train from Bratislava to Vienna and from there by train to Maribor.

This trip should take you about 5 hours and the price for a one-way trip is around 60 – 80 euros.

Finally, there is a direct bus connection between Slovakia and Slovenia. This is the cheapest way how to get from Slovakia to Slovenia.

In my opinion, this is the best option how to get to Slovenia. It is the fastest one and if you travel at least in pairs, it is also the cheapest option.

Useful tip: If you decide to use this transport option, don’t forget to buy an Austrian vignette because the best route is using the highways.

So what, do you still think that Slovakia and Slovenia are one and the same country? I hope that after reading this post, it is clear to you that these are two small but even more beautiful countries from Central Europe.

And I highly recommend you to visit both of these countries, it will definitely pay off.

link to Complete List of National Holidays in Slovakia (Explained)

For how small Slovakia is, it definitely has lots of interesting National Holidays. In this article, we will explain many of its most important holidays and traditions. There are 15 National...

Continue Reading
link to Visa to Slovakia for ALL Countries (Work, Student, and more)

This article covers the fundamentals of visa policies in Slovakia. Detailing the requirements and types of visas needed to enter, study and work in Slovakia. People from the Schengen area...